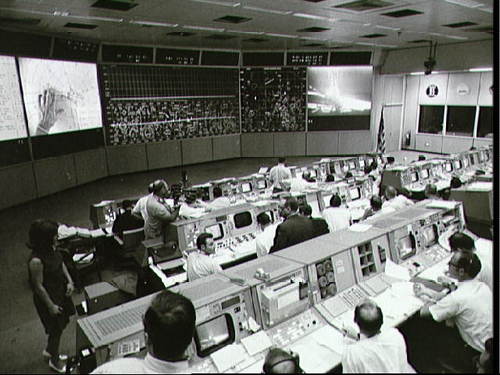 A few years ago I ran into Ron Howard at our local Starbucks. I said hello and told him how much I loved “Apollo 13,” which, in case you didn’t know, he directed. Howard was gracious, as you would expect a grown up Opie to be. While awaiting our drinks, he told me he was working on another movie about an historical event. The movie he told me about was “Cinderella Man.” I liked him a lot…he had that twinkle in his eyes that said there was a passionate and creative fire inside this soft-spoken, balding, middle-aged guy.

“Apollo 13” is a remarkable movie. It captured the story of one of NASA’s finest moments, when the NASA team’s extraordinary willpower, energy and creativity snatched the Apollo 13 crew from the jaws of death after an electrical malfunction impaired the spacecraft’s guidance and oxygen systems. The rescue effort was led by a veteran NASA mission director named Gene Kranz. During one of the movie’s best moments, Kranz (played by actor Ed Harris) ralles the troops and declares with resolve that “failure is not an option.”

The “failure is not an option” mindset has been burned into the collective psyche of Americans. You may not hear that exact phrase, but if you listen and observe closely, you’ll hear and see that this mindset is pervasive. It may be reflected by managers in a variety of settings from corporate suites, where accountants meet with CEOs to make decisions about financial statement reporting, to research departments, where scientists review research findings to secure important regulatory approvals, to the front lines, where sales people labor to meet monthly goals.

Unfortunately, the phrase and thinking has had unintended consequences. If you work at a nuclear power plant or on a surgical team, I can understand why this mindset makes sense. The problem is that it does more damage than good in other settings and arguably it has had a negative effect on NASA too.

In the investigations of the Challenger and Discovery Space Shuttle accidents, investigators learned that some engineers had concerns but were afraid to voice them because “failure was not an option” when it came to meeting the launch targets. The concerns of these engineers turned out to be valid. Because the issues were not raised and addressed, malfunctions likely occurred that caused the accidents. Too often, when “failure is not an option,” cutting corners is.

Did Marion Jones make up her mind that “failure is not an option” when she decided to begin her illegal performance-enhancing drug use?

Did some people on Wall Street decided that “failure is not an option” so they cut corners and put bad mortgage loans in securities portfolios, leading to the current credit crisis?

Did George Tenant, the former CIA director, think “failure is not an option” when he presented an imbalanced Intelligence Estimate to President Bush that made the case that Saddam was close to using weapons of mass destruction on Americans?

The issue here, as I see it, is that we need to be careful about how we define success and failure, winners and losers. John Wooden, the legendary UCLA basketball coach, said something wise about this. Wooden defines winners as individuals who have the self satisfaction that comes from giving their very best effort without resorting to immoral means. He said an individual can win a competition and not be a winner if they don’t give their all or they do what they know isn’t right. Likewise, Wooden said you can be a winner and not win a competition. Why would he say this?

During Wooden’s youth he witnessed his father Joshua’s extraordinary effort to save the family farm during the Depression. Although the Wooden family lost their farm, young John saw his father maintain his dignity and move on to something else. In John’s eyes if there was ever a winner in life, it was his dad. The farm was lost due to factors beyond Joshua Wooden’s control. John must have given this a lot of thought. He learned from the experience that all we can control is our own level of effort and that’s what makes us winners, or not. He learned to focus on his own effort and not obsess about the results.

Later Wooden became a basketball coach at Indiana State and when his team qualified for the post-season tournament during the 1946-47 season, the nation’s college basketball authorities wouldn’t let his team play if its one African-American player came with them. Wooden refused to play because it wouldn’t be right…he knew he could never be a winner if it meant humiliating one of his players. The next year Wooden’s team qualified again and this time the basketball authorities allowed Wooden to bring his African-American player. Wooden’s team lost to Louisville in the finals. Though he didn’t win the tournament in a literal sense, it’s difficult to imagine a bigger winner coming out of that tournament than Wooden. He was the man who faced down the evil of prejudice and, as a result, opened up post-season college basketball to African-American players. He went on to become one of the most respected coaches of any sport and his teams achieved one of the best records in sports history (ten national championships and four perfect seasons).

There’s a lesson in this, at least there has been for me. If we get so desperate that we are willing to resort to immoral means in order to win and be thought of as a winner, we had better remember what a real winner like John Wooden looks like. If we forget what a real winner is, we will eventually pay the price. There’s no long-term satisfaction in becoming a winner by illegitimate means. An illegitimate winner knows the truth. And eventually, people around him will figure it out too.

I keep a book about John Wooden’s life in my car so that if I ever see a Ron Howard again, I can pass it along to him. It could be his next big movie.