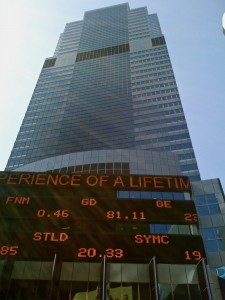 This is the mother ship, or at least that’s what I’ve always called the world headquarters of Morgan Stanley located in New York City’s Times Square. It was here that a significant moment in Wall Street history occurred on June 30, 2005. John Mack had been reinstated as Chairman and CEO by the firm’s board. On that day, when Mack and his wife Christy appeared at a meeting with hundreds of Morgan Stanley employees, they gave him a standing ovation. They knew this was an inflection point in the storied firm’s history. The man standing before them embodied their collective hopes that the firm would return to its former self by restoring a culture that was its greatest asset and the primary source of its competitive advantage.

Mack’s departure in early 2001 had come about as a result of Morgan Stanley’s merger with Dean Witter in 1997. Phil Purcell, Dean Witter’s CEO, became CEO of the combined firm and eventually pushed Mack out. Morgan Stanley’s reputation and culture suffered as a result of Purcell’s leadership style. I experienced the culture change first-hand. The book Blue Blood and Mutiny: The Fight for the Soul of Morgan Stanley describes this period in great detail and Joe Nocera of The New York Times wrote an excellent article about it entitled “In Business, Tough Bosses Are the Ones Who Finish Last.” Thanks to the vocal opposition to Purcell put up by former and current employees of Morgan Stanley, he was thrown out.

My introduction to Morgan Stanley came in 1996 when it purchased Van Kampen Investments where I worked reporting to the firm’s president and heading business and product development. As part of the team to integrate Van Kampen into Morgan Stanley, I commuted weekly to New York for a period of time. I was also part of a joint project to assess business opportunities in Japan. In 1998, I accepted  an offer to become chief marketing officer for Morgan Stanley’s Private Wealth Management Group. I was slightly apprehensive about moving to New York and joining this firm whose employees were known for their blue blood pedigrees. After all, I had grown up in the industrial town of Rockford, Illinois; my grandfathers had worked for a coal mine in the Appalachians; and I was the first in my family to go to college. I was intolerant of any hint of favoritism based on privilege rather than merit. I would soon learn that my concerns were unfounded.

Morgan Stanley was born as a result of the Great Depression. In 1934, the federal government forced the separation of investment banking and commercial banking pursuant to the Glass-Steagall Act and J.P. Morgan became two separate firms: J.P. Morgan and Company retained the commercial bank business and Morgan Stanley was created for the investment banking business. Both firms kept the values that J.P. Morgan himself summarized as doing first class business in a first class way.

From all I could see, this accurately described Morgan Stanley’s cultural DNA. The firm prized its reputation as first class. People at Morgan Stanley worked hard, were for the most part honest, and were typically engaged in philanthropic endeavors to help make the world a better place. Those who didn’t share the firm’s values weren’t considered to be “one of us” and they were thrown out if they lied, cheated or stole, or respectfully guided out if they didn’t live up to the firm’s standards of excellence. For me, Morgan Stanley’s values reflected my own and I was thrilled to be there and work alongside such outstanding colleagues.

The values that Morgan Stanley’s culture embodied included excellence in its every endeavor; open and, for the most part, civil debate on issues; and meritocracy in pay and promotions. It was a partnership culture in the very best sense and it had remained that way even after it converted from a legal partnership to become a publicly owned corporation in 1986. The energy and enthusiasm at Morgan Stanley was off the charts. I thought I had died and gone to heaven. My boss, John Straus, the head of Private Wealth Management, gave me the autonomy I needed to lead my department and get the job done. His door was always open when I needed his guidance or help navigating the politics that is part of every large firm. No one worked harder than John. My colleagues and I were inspired by his passion to create something great. I challenged the people I was responsible for leading to help Private Wealth Management reach its first billion dollar revenue year in history, a goal that we achieved  two and a half years later. It was one the best experiences in my professional life. Working at Morgan Stanley during those years was for me an experience of a lifetime.

Over time, as Phil Purcell and his loyalists exerted their control, that highly engaging environment soured. Former Morgan Stanley employees left in droves. John Straus left and, some months later, I did too. The experience was so eye-opening and disappointing to me that it was one of the catalysts for me to write the book Fired Up or Burned Out: How to Reignite Your Team’s Passion, Creativity and Productivity.

I’ve given a lot of thought to what made Morgan Stanley so successful. I know it was the firm’s people and culture. People were fired up because they worked in a Connection Culture. Another way to describe Morgan Stanley’s culture is that it was, as I wrote earlier, a partnership culture. David Sirota describes a partnership culture in his excellent book that I highly recommend entitled The Enthusiastic Employee and in this interview he did with Knowledge@Wharton.

How about you? Have you been a part of a Connection Culture or Partnership Culture where you felt connected to the firm’s mission, values, reputation, your colleagues and your day-to-day work? If so, what fired you up about it? I would like to hear about your work “experience of a lifetime.” Just post it in the comment section below.

(Note: on January 1st, 2010 James Gorman will succeed the retiring John Mack as Morgan Stanley’s CEO. John Mack will continue to be the firm’s chairman. To John Mack, I would like to say thank you for your leadership. And to James Gorman, congratulations and best wishes. Lead Morgan Stanley in a way that reflects the mindset of its founder who said  “…at all times the idea of doing only first-class business, and that in a first class way, has been before our minds.”  MLS)

Michael Lee Stallard speaks, teaches and writes about leadership, employee engagement, productivity and innovation at leading organizations including Google, GE, NASA, Lockheed Martin, General Dynamics and the Darden Graduate School of Business at the University of Virginia.  Most recently, Michael and his colleague Jason Pankau filmed a 90-minute program for Linkage’s Thought Leaders Series that will be released in January of 2010.  Michael wrote the guest editorial for Talent Management magazine’s January 2010 edition and last month his article on how the force of connection boosts productivity and innovation was featured as the lead article in the UK’s Developing HR Strategy Journal. Click on these links to learn more about Michael and Jason in the media and their speaking engagements.