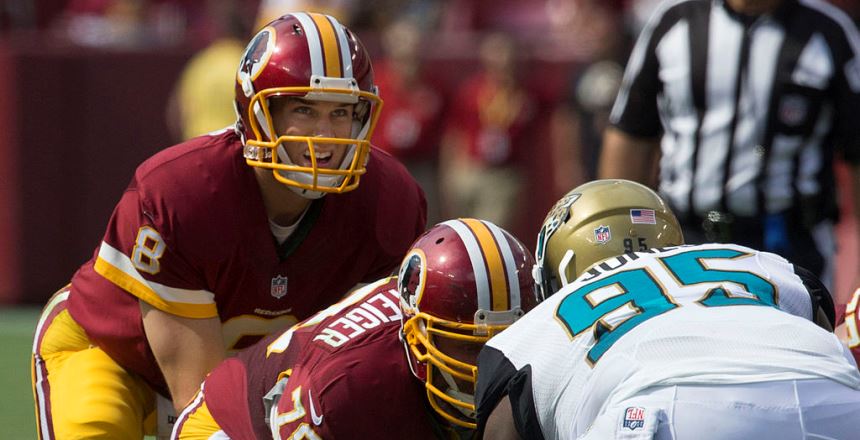 Leaders must be resilient if they are going to prevail in the face of inevitable challenges. One of the most interesting examples of resilience today comes from the world of sports where Kirk Cousins, a Washington Redskins quarterback who has been consistently underestimated, is helping lead the turnaround of a team that has had only one winning season over the last seven years.

Since naming Cousins the starting quarterback this season, the Redskins have won five home games and seen an uptick in energy and expectations. The recent win over the New York Giants moved the Redskins into a tie for first place in the NFC East.

Drafted by the Redskins in 2012, along with fellow rookie quarterback Robert Griffin III, most of the media dismissed Cousins as destined to be a NFL backup quarterback. Adding insult to injury, photos of Cousins appearing in the media frequently portrayed him as a lightweight. One photo consistently used showed Cousins with a goofy grin as he sat next to starting quarterback Robert Griffin III.  Another was of Cousins driving his grandmother’s minivan to Redskins’ practice. A closer look at Cousins, however, shows he is anything but a goof.

After playing football for a small Christian high school in Holland, Michigan, Cousins’ only Division I scholarship offer came last minute from Michigan State coach Mark Dantonio.  By the time of Cousins’ sophomore year, he was a team captain and became the first three-time Michigan State captain since the 1940’s. His hard work as a student earned him Academic All-Big Ten honors four years in a row.

Cousins was nominated to represent the players of the Big Ten at the conference’s annual media day at the start of his senior year. Pete Thamel of The New York Times attended the event and wrote that Cousins turned the largely predictable media day into an “internet sensation” by delivering a self-deprecating and inspiring speech about the privilege of playing in the Big Ten and the responsibilities that go along with it. Cousins received a standing ovation, the YouTube video went viral, and several Big Ten coaches wrote him personal notes to express their admiration.

To top it all off, Cousins has already written a thoughtful book titled Game Changer: Faith, Football and Finding Your Way. That’s quite an impressive record for a 27-year old.

Cousins has been called “Captain Kirk,” a nod to the iconic leader on the long-running television show “Star Trek.” Like the captain of the starship U.S.S. Enterprise, Cousins finds ways to succeed when objective evidence would suggest there is little hope of success.  For example, earlier this season when the Redskins were down 24-0 to Tampa Bay, Cousins rallied the team to the largest comeback in Redskins franchise history.

How does he do it?

The obvious answer is his competence and skill as an athlete and quarterback. Although Cousins has had limited experience in NFL games prior to this season, he’s getting plenty of playing time now and the results are evident.  So far this season he was twice named NFC Offensive Player of the Week.

Cousins has made it through plenty of stress and adversity over the course of his career. Presently, Cousins faces challenges such as the pressure to perform, leading the Redskins and concern for his father, Don Cousins, a minister in Orlando who is undergoing treatment for cancer. The two are especially close and his father continues to mentor him on spiritual and leadership matters.

Cheering Kirk Cousins on, both on and off the field, are his wife, parents, siblings, extended family and friends. This close group provides the support he needs to take risks and to strive to accomplish great things. In addition, Cousins, like many other current NFL quarterbacks, has a strong faith in God. Psychology research shows this relationship also makes people more resilient.

Kirk Cousins becomes a free agent in March. It’s going to be interesting to see what the future holds for him. Based on his rapid development with additional playing time, strong supportive relationships and his faith, I’d say Cousins’ future is bright. The Washington Redskins’ future will likely be bright too if they bet on Captain Kirk.

Application: Do you have confidants with whom you regularly converse about the ups and downs you experience each week and who encourage you through challenging times? If not, identify individuals you want to intentionally develop a relationship with, reach out to get to know them, and look for ways you can help them. Find times to regularly get together with them to learn what’s going on in their lives and share what’s going on yours.

4 Ways Millennials Can Boost Productivity and Fulfillment at Work