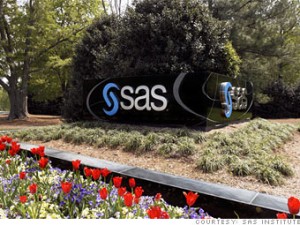 Congratulations to SAS Institute for being recognized the second year in a row as #1 on Fortune magazine’s 100 Best Places to Work list. Last year I met with Jim Goodnight, SAS Institute’s founder and CEO, to learn more about his leadership and SAS Institute’s culture.  You can read the article I wrote at  The Economic Times‘ website or below.

Most of the leaders I meet believe the people they lead are aligned with strategy and engaged in their work. The data suggest otherwise. The Conference Board released research in January that concluded employee satisfaction and engagement in America were at the lowest point since it began surveying more than 20 years ago.  The report also concluded that the downward trend began long before the Great Recession. Another well-respected organization, the Corporate Executive Board, released research last year that concluded 75 percent of the employees were not engaged and giving their best efforts and of the 25 percent who were engaged, 60 percent were not aligned with organizational goals. The bottom line is that 90 percent of American employees are either not engaged or aligned with strategy.

The potential productivity boost from improving employee engagement and strategic alignment is staggering.  Unfortunately, most leaders have a blind spot when it comes to these areas. Jim Goodnight, co-founder and CEO of SAS Institute, is not one of them. Recently, SAS was named number 1 on Fortune’s “100 Best Companies to Work For” list for 2010. SAS has made the list every year, five times ranking in the top five.

Goodnight, a 6-foot 4-inch tall North Carolinian with a Ph.D. in statistics, founded SAS more than 30 years ago with colleagues from North Carolina State University. Today, SAS is on a roll with annual revenues of approximately $2.3 Billion, a truly global business, a worldwide workforce in excess of 11,000 and an enviable long-term record of revenue and profit growth. Harvard Business School named Goodnight as one of the “20th Century’s Great American Business Leaders” and he was named one of “America’s 25 Most Fascinating Entrepreneurs” in Inc. magazine’s 25th anniversary issue.

Earlier this month, I met with Dr. Jim Goodnight to talk about his views on corporate culture and how it affects strategic alignment, employee engagement, employee retention and overall performance. What stood out to me as I observed Goodnight is that he loves to think about how to crack the code of difficult problems.  During our conversation it was evident that he is proud that SAS is developing software to solve problems in a broad range of fields.  He spoke of using parallel processing, a form of artificial intelligence, to create new solutions that address thorny risk management issues faced by financial services institutions such as banks and insurance companies. Education is another field he mentioned. Already 30,000 teachers are using the educational software developed by SAS that the company makes available to teachers online at no cost. Topping Fortune’s “Best Companies to Work For” list, it would appear that SAS and Goodnight are cracking the code of corporate culture too.When Goodnight founded SAS, he already knew that work environments affect employee productivity and retention.  He has also stated that he believes the work culture is key to the creativity inherent in knowledge work.  Earlier in his career when he worked for a NASA subcontractor on the Apollo program, he observed the dismal environment of employees working in cubicle farms and how it contributed to annual employee turnover of around 50 percent.  It didn’t take a rocket scientist to see the negative effect that work environment had on organizational performance.

From the start, he treated SAS employees as he had always wanted to be treated. This common sense approach is all too uncommon in practice. In return, he expected they would be more likely to stay as well as to align their behavior with organizational goals and give their best efforts. Few companies can boast of a performance record like SAS’s and Goodnight believes the firm’s culture is key. Its annual employee turnover rate of approximately four percent — versus the typical 20 percent experienced by companies in the software industry – provides additional data that support Goodnight’s approach.

At a time when most companies are laying off workers, expecting their employees to work longer hours, and cutting back on benefits, SAS is a different story. A relative degree of job security distinguishes SAS from other organizations. During the difficult business environment in 2009, Goodnight reassured employees that there would be no layoffs at the privately-held company.  His rationale was that he was in a better position financially to weather the storm than employees were.  He did, however, explain to them that SAS was not in a position to pay raises last year and he asked everyone to help reduce costs.  Employees responded by indentifying and implementing cost cuts that reduced SAS’s expenses by 6 to 7 percent.  SAS employees work 35 hours in the average week out of offices on a bucolic campus with 6,000 pieces of corporate artwork.  Perks on the property include a health club, health center, subsidized cafeterias and a child care facility on site. To help employees learn and grow, SAS encourages participation in industry conferences.

Employees also benefit from an unusual degree of autonomy. SAS has no dress code, no set work hours nor any limitation on annual sick days. Employees appreciate SAS’s culture of informality and openness where Goodnight holds “Java with Jim” sessions for employees to sit down with him for coffee and ask him any question they like.  The culture also has an egalitarian feel to it.   Everyone there knows that Goodnight, in addition to his CEO duties, spends time writing code like many of them.

The culture Goodnight has fostered at SAS works because it meets human needs that are necessary to thrive at work: respect, recognition, belonging, autonomy, personal growth and meaning.  When these needs are met, people thrive, individually and collectively.  When they are not met, people seek means to meet them on their own, oftentimes in ways that work against the organization.

Goodnight clearly knows that he has identified a competitive edge and he’s not about to be pressured into following the crowd that he views as irrational when it comes to corporate culture.  When most entrepreneurs would have gone public long ago, Goodnight decided it didn’t make sense.  He didn’t want analysts on Wall Street telling him how to run his business and forcing him to cut out the elements of SAS’s culture that give it an edge.

As we concluded our conversation, Goodnight was looking forward to getting back home to Cary, North Carolina where he and his wife live in a home on SAS’s campus.  Who can blame him?  In an oftentimes less than rational and volatile world, SAS Institute is an island of sanity and stability.  Just what Dr. Goodnight ordered.

Michael Lee Stallard is president of E Pluribus Partners, a leadership training and coaching firm.  He is the primary author of Fired Up or Burned Out: How to Reignite Your Team’s Passion, Creativity and Productivity. Additional information at www.michaelleestallard.com.