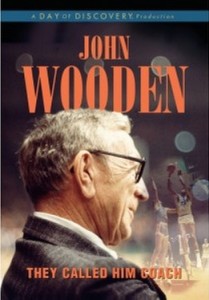 Day of Discovery Documentary – John Wooden: They Called Him Coach

I’ve written a lot about legendary Coach John Wooden on this blog, and for good reason. His life, leadership, and legacy are an inspiration to us all.

I highly recommend taking the time to watch the documentary John Wooden: They Called Him Coach, available online. You’ll learn more about Wooden’s perspective on success, love, and faith and see interviews with his family and former players. It will definitely motivate you to be a better leader, family member, and friend.

What’s your favorite Coach Wooden story? Feel free to share in the comments.


Recently I was speaking at a university about the importance of connection and Connection Cultures to help students, faculty and staff thrive in institutions of higher education. After I spoke, the president of the divinity school came up to me and said I needed to see a great new comedy entitled Warm Bodies.  He informed me that the movie is about mummies who are brought back to life by human connection.  How great is that!  Check out the trailer above.  I plan the watch the movie on iTunes this weekend.

It’s been said that artists have their finger on the pulse of the culture.  Warm Bodies is a case in point, even if its protagonist had no pulse to speak of.

While looking for a video to watch a friend recommended Departures, a film by Yojiro Takita that won an Oscar for best foreign language film. I highly recommend it. The movie touches on issues of employee engagement, connection, identity and human value that I raise in my changethis.com Connection Culture Manifesto. There were moments that this film reminded me of the beautiful book Let Your Life Speak: Listening for the Voice of Vocation by Parker Palmer.

When you watch the film you’ll see a myriad of situations that relate to connection, including the protagonist Diago’s connection to his father, his wife, his employer, his former occupation and his new one, his clients, and his friends and acquaintances in the community.

Connection and the character values that support it resonate deeply with the Japanese, a topic that I will elaborate on in an upcoming blog post.

During his years in prison Mandela was transformed. He came to know several of his warders and learned that Afrikaners could change. He read the biographies of men and women who exhibited great character. Forgiveness, he concluded, was the only path to unite the nation. His courage to forgive made all the difference.

Many white South Africans were moved by Mandela’s example. On one Sunday while visiting a Dutch Reformed Afrikaner Church, Mandela recounted that “The men all wanted to touch me. The women all wanted to kiss me. The children all wanted to hang on my leg.” A few years earlier, he reflected, he would have needed security guards to protect him from being assaulted but “this time they were there to protect me from being killed out of love.”

While growing up did you have role models in your life who had a profoundly positive effect on you? Perhaps it was a teacher who believed in you and pushed you to strive, a parent of one of your friends who consistently provided encouragement or a coach who modeled great leadership, teaching you to work hard and play fair. I’m fortunate to have had positive role models and mentors in my life who brought out the best in me and I’ve tried to play that role for younger people in my community.

I was reminded about positive role models recently while watching a remarkable television program called Friday Night Lights. I really want to encourage you to check out this award-winning and critically-acclaimed drama. This show is gritty and real.  I don’t want to give away the story but suffice it to say the writing, acting and production of this show are extraordinary, a far cry from many of the vacuous programs on today.  You can rent the first three seasons at your local video store and the fourth season will be broadcast soon on NBC (if you have DirecTV, you can watch the fourth season now on Wednesdays at 9:00 PM Eastern).

While I’m not an avid football fan (and you don’t have to be to enjoy this show), I love this drama for its inspiration, entertainment and the values it promotes. The primary examples of great role models on display are in the characters of coach Eric Taylor and his wife Tami. Eric is the high school football coach in a football-crazy West Texas town that, incidentally, is based on Odessa, Texas, where I worked for Texas instruments in my first job after college.  Tami is a guidance counselor who becomes the high school’s principal in later episodes.   Eric and Tami are both leaders who inspire the kids to achieve excellence in their academic and athletic endeavors, and in their relationships and personal character. The show’s adult and teenage characters face the types of heart-wrenching trials and temptations that we all face in life, whether it’s the sickness or death of a loved one, a friend who needs us during a busy and demanding time in our life, or the lure of doing something we know is wrong for the sake of status or financial gain.

The above video clip includes images from Friday Night Lights set to Coldplay’s song “Fix You.”   The images coupled with the song’s music and lyrics capture the spirit of Friday Night Lights. I hope you’ll check it out. You’ll be glad you did.

The 1951 movie “A Christmas Carol” is based on Charles Dickens’ classic novel.  It’s the fictional story of  Ebenezer Scrooge, a business owner who idolizes wealth and mocks charity.  Scrooge’s values, and the behavior emanating from them, isolate him from family and friends and make him miserable. Scrooge gets a wakeup call in the form of a nightmarish visit from the ghosts of Christmas past, present and future.

“A Christmas Carol” highlights how certain character vices lead to relational isolation which results in dysfunction and death.  This is in contrast to virtuous character that leads to human connection, thriving and life. Charles Dickens understood just how powerful human connection is and that it comes from the character strengths of compassion, empathy, generosity, kindness and magnanimity. These are character strengths and virtues we celebrate during the holiday season (and hopefully live year round).

The same themes of connection and character are explored in the 1946 holiday classic, “It’s a Wonderful Life.”

The issue of human connection at work and in life takes center stage in the hit movie “Up In the Air.” The plot follows a business executive played by George Clooney who is continuously traveling to fire people. He views meaningful relationships as excess baggage and his primary aspiration is to become a 10 million mile traveler on American Airlines. A new, hot shot, young, female co-worker proposes virtual firing rather than in-person. Ironically, this same woman confronts Clooney’s character for his vacuous life style that lacks meaningful relationships. It’s a must see movie that is hilarious and tragic. It criticizes the values of today that idolize task excellence but give short shrift to the human need for relationships (or to achieve “relationship excellence” in organizations as I written in the past).

Artists always have their finger on the pulse of culture change. The favorable response to this movie is yet another sign to me that people feel the pain from diminished human connection in the workplace and in life. The evidence is overwhelming that connection = thriving and life, disconnection = dysfunction and death, for individuals, families, organizations and nations. It’s why I believe Connection Cultures are the next step in the evolution of organizations and civil societies. Do you agree? If so, why? If not, why? Do you have meaningful relationships in your life? If not, reach out to others this holiday season and begin the new year by developing more and deeper relationships in your life.
___

Michael Lee Stallard speaks, teaches and writes about leadership, employee engagement, productivity and innovation at leading organizations including Google, GE, NASA, Lockheed Martin, General Dynamics and the Darden Graduate School of Business at the University of Virginia. Most recently, Michael and his colleague Jason Pankau filmed a 90-minute program for Linkage’s Thought Leaders Series that will be released in January of 2010. Michael wrote the guest editorial for Talent Management magazine’s January 2010 edition and last month his article on how the force of connection boosts productivity and innovation was featured as the lead article in the UK’s Developing HR Strategy Journal. Click on these links to learn more about Michael and Jason in the media and their speaking engagements.

I highly recommend seeing The Blind Side, a movie about Baltimore Ravens’ offensive tackle, Michael Oher.  It’s worth the price of the ticket alone to see Sandra Bullock’s tour-de-force performance as Michael’s adoptive mom, Leanne Tuohy.  What I especially like about the movie is that it shows how the right social environment helps people thrive in life.

I don’t want to give away the story so let me just say in a nutshell that it was Leanne Tuohy who reached out to Michael.  It would have been easy for her to ignore him, but she didn’t. Instead, Leanne felt compassion for a young man who was wearing shorts in the winter and hanging around a high school gym just to stay warm.  She took the time to get to know him and his life’s story.  While others saw him as “Big Mike,” a quiet, giant, African-American young man from the Memphis ghetto, Leanne Tuohy saw him as a thoughtful boy with a big heart and protective instincts to match.  She called him “Michael,” a name he much preferred to “Big Mike.” Leanne’s insights helped Michael discover who he really was deep down inside and who he could become. These insights helped Michael see himself as a protector who “has the back” of his family and those he loves. It should come as no surprise then to learn that Michael Oher thrived in football as an offensive tackle responsible for protecting his teammates from the defense.

The Blind Side shows how the social environment we live in shapes us for good or ill.