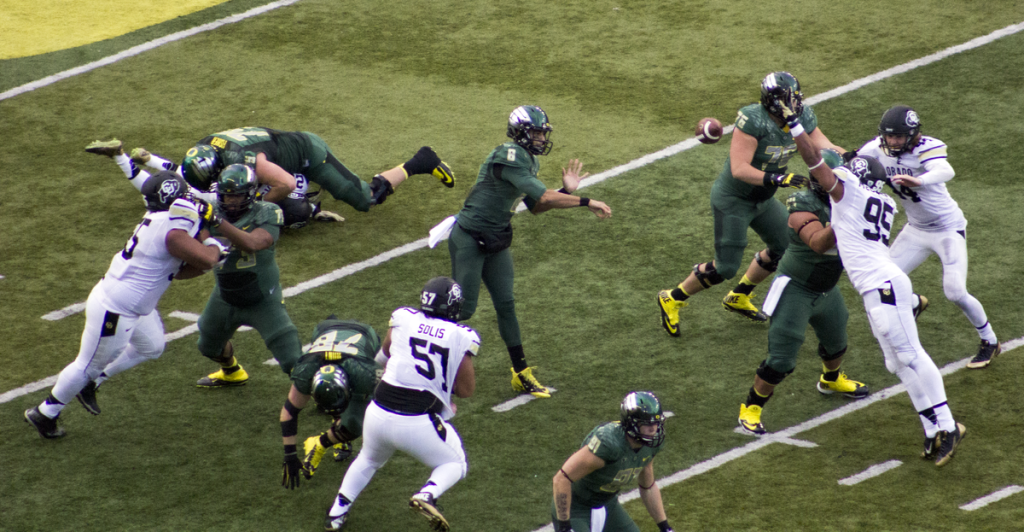 Marcus Mariota throws a pass while playing against Colorado in 2014. Photo courtesy of Alex Thies.

As seen on Fox Business

Marcus Mariota’s list of accomplishments is impressive. Although his Oregon Ducks football team ultimately lost the national championship game to Ohio State, the young quarterback can still claim a Heisman Trophy, Rose Bowl and Fiesta Bowl victories, and numerous other awards earned in just a few short years. His success as a quarterback places him in an elite group of individuals who have reached the pinnacle of their fields.

But how do people like Mariota become so successful? Are there certain characteristics these people share that set them apart?

Successful people like Mariota display expert-level skill, something psychologist K. Anders Erikson has shown requires approximately 10,000 hours of intentional practice, with coaching, to achieve. Ten thousand hours is roughly equivalent to ten years of putting in 20 hours of practice a week.  Obviously then, perseverance and practice play an essential role in future success.

Every bit as essential to becoming great at anything, yet less obvious, is the importance of character strengths, in particular humility and love. Humility encourages us to seek and truly accept coaching and mentoring, and love is what allows us to give and receive the relational support of others needed to persevere through the inevitable ups and downs of life.

It is clear that Mariota benefits from these two character strengths.  His humility is on full display during press interviews. When Mariota is praised, he deflects it to his team and refuses to take full credit for his achievements.

Mariota has spoken about the influence of his Christian faith and Hawaii’s Aloha culture, both of which encourage humility and love. Christianity teaches its followers to humbly love and serve others and according to Hawaiian leadership expert Rosa Say, the Aloha culture includes values such as ‘Ohana, which is an appreciation for family and community whose interests you look out for and who look out for you too.

Why are love and relationships so critical to success? By loving and being loved, we develop stronger hearts, giving us the capacity to achieve difficult things. The French word for heart is coeur, which is the root of the word courage. To encourage means to share one’s heart with another. Mariota’s relationships with his family and community give him the courage to take risks and to lead others. In essence, by truly connecting with other people Mariota has developed what can be called the “heart of a champion.”

While task excellence alone may be sufficient to achieve success for a time, truly great leaders know that a combination of both task and relationship excellence is required to sustain success long-term. The years Mariota spent developing his skills plus the connection he has with his family, community and team contribute to his success, which has spanned multiple football seasons.

In summary, if you want to be great at something, recognize that it will take years of persistent practice, humility to learn from mentors who will help you see what you can’t, and the courage to love family and friends. Your love will nourish them with emotional support and encouragement just as their love and encouragement will nourish you. Encouraged and loved, you’ll find you can persevere through the peaks and valleys you’ll encounter along the way.

It’s surprising, isn’t it, that developing one’s heart is an essential but rarely mentioned element in achieving lasting greatness. If we aspire to achieve and sustain a high level of excellence, like Marcus Mariota has, we must truly develop the “heart of a champion.”