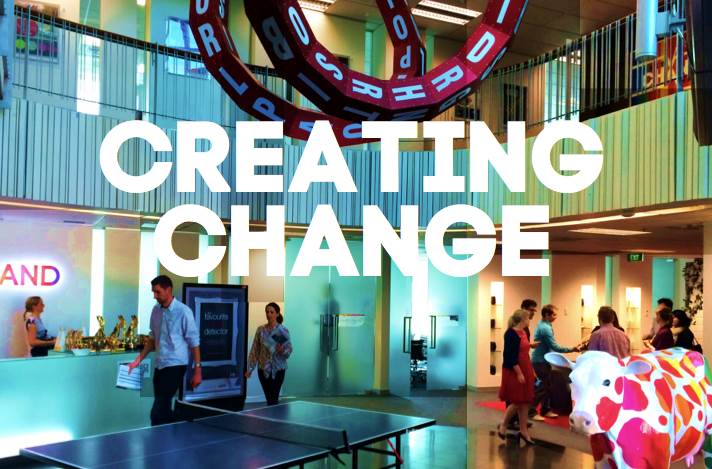 As seen on Fox Business and SmartBlog on Leadership

Consider this: few of the 500 largest corporations from 50 years ago exist today. They failed to change and became irrelevant, left behind by emerging competitors more in tune with the market.

How is it possible that so many top companies made this same fatal mistake? The answer may lie in a very simple explanation. Humans run corporations, and humans have a biological aversion to change.

Change creates stress.  It boosts stress neurotransmitters in our brains and stress hormones throughout our bodies. It shifts brain activity from the cortex where we make rational decisions to the mid-brain where we are more likely to make rash decisions.

We can handle short periods of stress.  Ongoing stress, however, kills productivity, wellness and wellbeing.

As humans, we naturally avoid change, and when we do encounter change, we tend to handle it poorly. The best organizations recognize this, and cope with change and the accompanying stress through carefully designed workplace cultures.

There are three types of workplace cultures common today: cultures of control, indifference and connection. These cultures significantly affect the long-term health of organizations.

In cultures of control, people with power, control, influence, and status rule over others. This culture creates an environment where people fear to make mistakes and take risks.

Cultures of indifference are predominant today. In this type of culture, people are so busy chasing money, power, and status that they fail to invest the time necessary to develop healthy, supportive relationships. This is, in essence, the culture that evolves when no one cares to actively shape the culture.

Cultures of control and cultures of indifference don’t adapt well to change. In these cultures, people turn on each other rather than pulling together to adapt to change.

A connection culture on the other hand, provides the right environment to navigate change and diminish the corrosive effects of stress. Connection culture can be defined as an organizational culture marked by shared identity, empathy, and understanding – a definition that tells us the elements required to create a great workplace culture.

Breaking the definition down further, shared identity is how the members of a group think of themselves and is based on a mix of vision, mission, values and reputation. Shared empathy comes about when people care for others rather than treat them as means to an end. Shared understanding is enhanced when good, two-way communication gives people a voice, though not necessarily a vote, in decision-making. When these three factors are present, a bond is created that keeps people feeling safe so the brain and nervous system work in a state of balance that supports the rational decision-making and cooperation necessary to effectively deal with change.

Several years ago, one of my clients, FCB, a leading global advertising network, hired a leader named Bryan Crawford to manage its New Zealand agency, which had approximately 60 employees and lagged in the marketplace. Bryan expanded the leadership team and asked them to work together to create the culture they always wanted to work in. He was approachable and got to know the people in the agency.

Detailed financials were shared with staff so they could see the impact of their ideas as they were implemented. Staff responded with greater engagement and actions that improved FCB’s financial performance. They even recommended sacrificing the beer budget for the sake of saving jobs.

FCB New Zealand’s connection culture united them.  As a result, they pulled together and successfully dealt with change. Since that time, FCB New Zealand has nearly quadrupled in size.  It is consistently recognized as one of the best places to work and the best company in its marketplace.  Acknowledged as one of the best leaders in the Asia-Pacific region, Carter Murray, FCB’s Global CEO, appointed Bryan to Global Vice Chairman, in recognition of his quick turnaround of the business, remarkable results and superior leadership.

Adapted from Connection Culture: The Competitive Advantage of Shared Identity, Empathy and Understanding at Work.

Learn more about employee engagement and leadership by signing up for my Connect to Thrive newsletter.