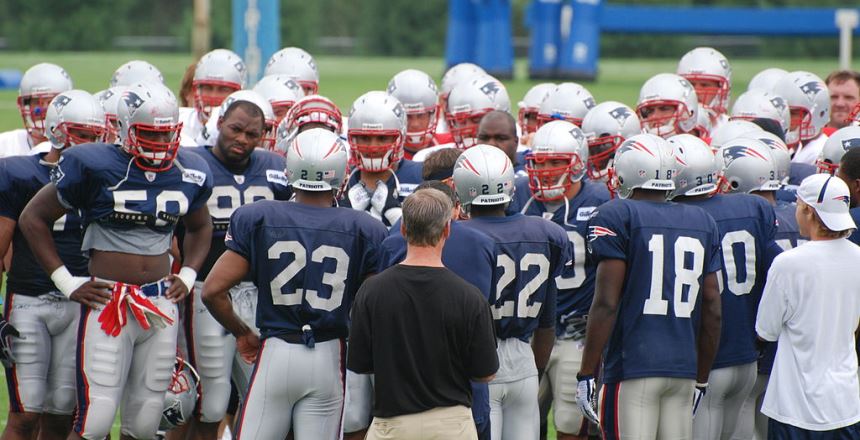 The New England Patriots just won their fifth National Football League Championship since 2002, but their success isn’t a surprise to those who study connection. Here’s what we wrote about the team in the 2007 book Fired Up or Burned Out:

“In recent years, the New England Patriots football team has won an astounding three National Football League Championships without a roster of big name stars. A high degree of connection among the team helps explain why the Patriots have been so successful. The beliefs and behaviors of Head Coach Bill Belichick and quarterback Tom Brady set the tone for the rest of the team and create trust, cooperation, and esprit de corps.

The inspiring identity that Bill Belichick holds out to the team is one of achieving perfection through team effort. Similar to the vision that John Wooden had for his UCLA Bruins basketball team, Belichick has his players thinking about how to improve themselves and their teammates in order to make the Patriots the best they can possibly become. He doesn’t rely on emotionalism or stirring up hate against the opposing team. Instead, he focuses on statistics such as fumbles, interceptions, sacks, pass completion percentages, and other forms of objective, unambiguous performance measurement. Continuous improvement to reach perfection is Belichick’s and his players’ relentless goal.

To increase connection among the players, Belichick doesn’t single out players for punishment. He makes the whole team do more work when a single player commits an error, which encourages players to help one another.

Belichick emphasizes one intangible factor: his players’ selflessness for the sake of the team. He shows no reluctance to bench egotistical players who act selfish. Belichick has also been willing to trade a talented player whose salary demands work against team connection.

Quarterback Tom Brady epitomizes the kind of team player that Belichick admires. Players around the league admire Brady for his humility and commitment to his teammates. An enthusiastic Dallas Cowboys receiver, Keyshawn Johnson, gushed that “the guy just turned 28 . . . three Super Bowls at that age . . . Un-freakin’-believable. And with his attitude, he’s not done. I bet he’s got three more in him.”

Many of Brady’s attributes increase human value in the Patriots culture. In early 2005, Brady stunned sportswriters by accepting a six-year, $60 million contract that was $38 million below the contract of Indianapolis Colts star quarterback Peyton Manning. Brady explained that he wanted the team to have the money available for other players. Sports Illustratedsenior writer Peter King wrote that in covering football for sixteen years he had never seen anything like that, and ‘if you think that plays well in the locker room, you’re right.’ Sports Illustrated named Brady its 2005 Sportsman of the Year and noted that Brady’s ‘greatest achievement grows out of a generosity of spirit.’ When MasterCard wanted Brady to pitch its product in a major television advertisement, Brady insisted that his offensive linemen join him in the ad or he would have to pass.

Belichick increases human value on the team by giving his assistant coaches considerable autonomy in making decisions, and he increases knowledge flow by communicating with players in the weekly team captains’ meeting. This marks a considerable change from Belichick’s time as head coach for the Cleveland Browns when he was criticized for micromanaging and failing to communicate.

With the high level of connection on the New England Patriots team, it will likely be a force in pro football for many years to come.”