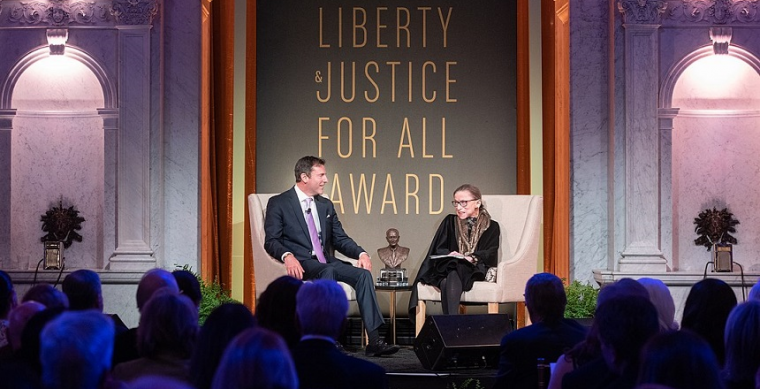 Justice Ginsburg valued and fostered collegiality among her colleagues. Some of her closest relationships at the Supreme Court were with justices who held opposite views. For example, about Justice Sandra Day O’Connor, Justice Ginsburg said she was “as close as I came to having a big sister.” When Justice Ginsburg was first diagnosed with cancer, Justice O’Connor, herself a cancer survivor, provided guidance, support and encouragement.

Her warm friendship with the late Justice Antonin Scalia, which began when they worked together as judges on the U.S. Court of Appeals for the D.C. Circuit, was especially well known. They appeared to be polar opposites in many ways but found bridges of connection. Justices Ginsburg and Scalia shared a passion for writing legal opinions that provided clear guidance on the law. Outside of work, they shared a love of opera.

In a live interview with Justice Ginsburg in September 2019, David Rubenstein pointed out that people are often “surprised at the civility that exists between justices” given that their writings might imply otherwise. He asked if it was awkward to attend an opera with Justice Scalia after he had sharply disagreed with her views. “Not at all,” she replied. She went on to say that one of the things she enjoyed most about their friendship was his sense of humor and she spoke of how when they were on three-judge panels in the court of appeals, Scalia would sometimes lean over and whisper something funny to her. “It would crack me up. I had all I could do to contain hysterical laughter.”

Current Supreme Court nominee, Amy Coney Barrett, a former clerk to Justice Scalia, her mentor, described the Ginsburg-Scalia relationship this way:  “[They] disagreed fiercely in print without rancor in person. … These two great Americans demonstrated that arguments, even about great consequence, need not destroy mutual affection.” Once, when asked why he was giving two dozen roses to Justice Ginsburg on her birthday when she never gave him the vote he needed on a close case, Justice Scalia replied, “some things are more important than votes.”

Justice Ginsburg was also well known for taking good care of her law clerks. She got to know them, and their families, personally, mentoring many of her former clerks later in their careers. She had high expectations for their work while also being supportive. Justice Ginsburg demonstrated her interest in them even in the little things such as remembering and celebrating birthdays and sending gifts on special occasions. ‍

Another characteristic to admire in Justice Ginsburg was that she chose to ignore insensitive remarks. Her mother-in-law once gave her advice that in marriage “every now and then it helps to be deaf.” Justice Ginsburg carried that wisdom into her working relationships as well. “When an unkind or thoughtless word is said, I just tune it out,” she’s explained. That’s good advice for all of us. ‍

Justice Ginsburg maintained a mindset that embraced the role of constructive criticism. She welcomed Justice Scalia’s unsolicited feedback on grammar, noting that he was an expert grammarian, having had a father who taught Latin in college and a mother who was an elementary school teacher. She described how Justice Scalia would sometimes send her his written opinion (the document that described the rationale supporting his decision as a judge) in advance and how reading it helped her sharpen her thinking and the opinion she wrote that disagreed with his views. Likewise, she offered her advice on his opinion drafts, sometimes saying, “Your draft is so strident. You would be more persuasive if you toned it down.” It was advice, she noted, “that he never, never took.”

After Justice Ginsburg was treated for her first cancer in 1999, her weight dropped to around 100 pounds and she looked unwell. Her husband, Marty, encouraged her to get a personal trainer who could guide her and help her rebuild her strength. As a result, she began regularly working out twice a week with a trainer, Bryant Johnson. (You may have seen the video of him honoring her by dropping to the ground and doing push-ups in front of her casket as she lay in state in the U.S. Capitol.) Justice Ginsburg maintained a very full schedule but she took seriously the need to take care of her health through exercise. How does this relate to connection? The state of our emotional and physical health impacts how well we connect with those around us. If you’re stressed, in pain, or worn out, you are more likely to not think as clearly and you’re more likely to overreact to an irritation.

Ruth Bader Ginsburg lived a long, productive and meaningful life. An introvert, she was clearly intentional about connection. Amidst the current divisive political climate and social unrest, her example of valuing and being in dialogue with others, including those who strongly hold different perspectives and convictions, should be an inspiration to us all. ‍

To learn more about Justice Ruth Bader Ginsburg, I recommend watching her interviews with David Rubenstein which you can find here (part I) and here (part 2).