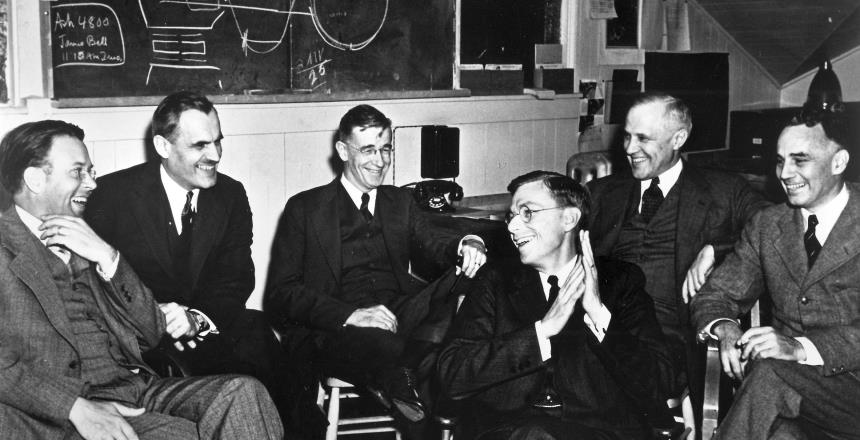 Vision represents the cultural element of inspiring identity. As the following story illustrates, inspiring identity is a crucial factor in team performance and can help organizations overcome tremendous obstacles.

Inspiring Identity and the Manhattan Project

In Warren Bennis and Patricia Biederman’s insightful book Organizing Genius, they tell the story of America’s race to make an atomic bomb before the Nazis during World War II. The Manhattan Project, as it was called, represented one of the most challenging and significant scientific accomplishments in history.

The story began in 1939 when Albert Einstein learned from three Hungarian physicists who had defected to America that the Nazis were trying to build an atomic bomb. Einstein wrote a letter to President Franklin Delano Roosevelt warning him that he believed the Nazis might find a way to do it. Within days of receiving Einstein’s letter, FDR established an advisory committee to investigate using atomic energy for national defense.

During 1941 and 1942, research was conducted at four universities: Columbia, Princeton, Berkeley, and Chicago. By mid-1942, the project had become the number one defense priority with a $2 billion budget. In the fall, soon-to-be Brigadier General Leslie Groves was appointed to head the project following his stint building the Pentagon. General Groves, a 250- to 300-pound crusty veteran career officer, began to pull together the people and the resources to make it happen.

On December 2, 1942, a team led by Enrico Fermi, a brilliant physicist, successfully created a self-sustaining nuclear reaction in an unused squash court under the University of Chicago’s football stadium. It was a pivotal moment that meant the project could shift to producing an atomic bomb since the concept had been proven.

One scientist on the project was a young genius from Princeton named Richard Feynman who was to supervise technicians supporting the project. For security reasons, the army did not want the technicians to know the purpose of the project. As a result, it was difficult for them to put their hearts into their work. Their productivity was lackluster, and the quality of their work was disappointing. Feynman asked Robert Oppenheimer, the technical leader of the scientists and engineers working on the project, to let him inform the technicians about the project’s purpose. His request approved, Feynman explained to the technicians what they were working on, its importance to the war effort, and the value of their contribution to the overall project.

After the technicians understood the meaning of their work, Feynman said he witnessed:

Complete transformation! They began to invent ways of doing it better. They improved the scheme. They worked at night. They didn’t need supervising in the night; they didn’t need anything. They understood everything; they invented several of the programs that we used . . . my boys really came through, and all that had to be done was to tell them what it was, that’s all. As a result, although it took them nine months to do three problems before, we did nine problems in three months, which is nearly ten times as fast.

The technicians’ improved productivity and innovation helped the Allies beat Hitler in the race to make an atomic bomb. On the morning of July 16, 1945, the Manhattan Project team watched as the first atomic bomb was exploded in the New Mexico desert. Their efforts gave the Allies a decisive edge in the war. Regardless of your personal feelings about the development and use of the atomic bomb, this bit of history is one clear example of the power in helping people find meaning in their work.

The Organization’s Story is my Story

Each one of us has a personal identity, in other words, how we think about ourselves. This internal identity is shaped by a host of factors, such as birthplace, rearing, schools, and the people and events in our lives that influenced our beliefs and our aspirations. Our identities are expressed externally in where we work, what organizations we belong to (other than work), what we wear, what we drive, where we live, and so on. Identity influences almost everything we do. Savvy marketers understand this and shape brands to appeal to how we like to think of ourselves.

Organizations have identities too. I like to think of identity as the story of an individual or organization. Some stories, such as those of the Marine Corps, Memorial Sloan-Kettering Cancer Center, and Apple Computer, provide tremendous inspiration to the people who are a part of them and who, through their words and deeds, continue to write new chapters in the identity story of their organizations.

To be effective, it’s necessary to go beyond task thinking and transform the way people think about the organization. The inspiring identity of an organization helps to satisfy the sense of purpose, significance, and pride we all crave. Unless you inspire people, you have not added this element to the work environment. And absent inspiration that fires them up, people just show up for duty.

This article has been adapted from the book Fired Up or Burned Out: How to Reignite Your Team’s Passion, Creativity and Productivity.