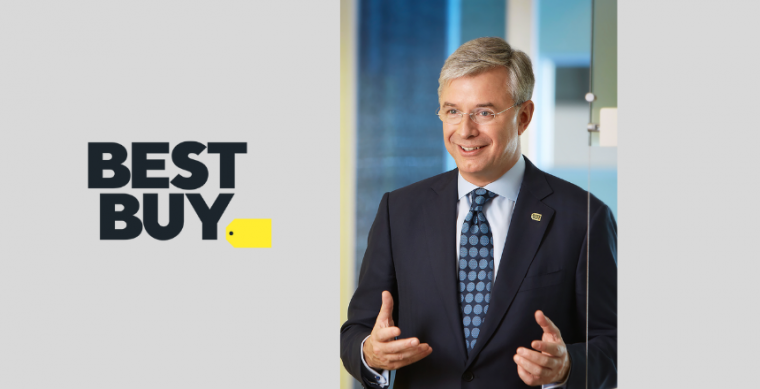 As former Chairman and CEO of Best Buy from 2012-2019, he led a spectacular turnaround of the consumer electronics retailer and witnessed the power of connection firsthand. He describes his experience in The Heart of Business: Leadership Principles for the Next Era of Capitalism. Joly wrote:

Through all my experiences, culminating in the incredible years at Best Buy, I have come to believe – to know – that purpose and human connections constitute the very heart of business. And I believe they should be at the heart of the necessary and urgent refoundation of business now underway. Capitalism as we have known it over the past few decades is in crisis. More and more people hold the system responsible for social fractures and environmental degradation. Employees, customers, and even shareholders expect much more from corporations than a blind pursuit of profit. Disengagement at work is a global epidemic. More recently, a new civil rights movement and the global Covid-19 pandemic have accelerated the need to rethink our system if we are going to tackle the enormous challenges facing us.

Tapping Into the Power of Connection

Human connection is a force that helps individuals and organizations thrive. Hubert Joly gets this. As I have advocated for almost twenty years now, the most effective leaders unite people and tap into the power of connection when they communicate an inspiring vision, value people and give them a voice. It’s this combination of Vision plus Value plus Voice that creates a culture of connection among people who work in an organization.

As people, we’re curious. Knowing how others go about sharing their vision, demonstrating they value people and increasing knowledge flows as they give people a voice might shed some light on our own situation and give us new ideas to try. That’s why over the years I’ve written numerous profiles of leaders who are results-driven and relationship-minded, including Alan Mulally, Frances Hesselbein, CNO Admiral Vern Clark, Duke’s Coach K, the rock band U2, and Costco, highlighting attitudes and actions that cultivate cultures of connection. Reading his account, I found Joly’s story to be compelling. Vision, Value, Voice and the resulting connection were on full display.

Leading Best Buy, Joly connected with people by communicating an inspiring vision and working to keep it front of people. One action taken was to articulate Best Buy’s mission, its “noble purpose,” as “enriching lives through technology.” More than just words on a page, business strategy was linked to the purpose and several key human needs were identified that could be enriched through technology. Joly wrote that this changed how they did business, spurring innovation and growth as Best Buy moved “from a business focused on transactions and selling products to one that developed solutions and lasting customer relationships.” It gave people who worked at Best Buy meaning by creating a mindset that everyone was serving a cause greater than themselves.

Vision was also boosted when stories that “connected purpose to practice” were shared on Best Buy’s blog and at company gatherings. To build positive emotions and a sense of momentum that Best Buy was making progress during the turnaround, “nuggets of good news” were communicated at every opportunity (e.g. “Look, we are growing in Chicago! And look at how well our small appliances are doing!”).

Joly valued people and he viewed them as individuals rather than thinking of them as mere means to an end. He set out to “[create] an environment in which individuals flourish.” He got out and connected with people working on the front lines at Best Buy’s stores. He had the humility to learn from them (which reminded me of another Frenchman, the Marquis de Lafayette, who wrote that soldiers he commanded on the front line during the American Revolution were his greatest teachers). Joly restored generous employee discounts. And despite pressure from Wall Street, he made layoffs a last resort.

Crises often test a leader’s and an organization’s values. When Hurricane Maria devastated Puerto Rico in 2017, Best Buy responded quickly and with compassion. All employees working on the island were accounted for and needs were identified. All told, a cargo plane made 14 trips to Puerto Rico to deliver supplies such as diapers, water and food to employees there. Financially, every employee was given $200 in the first days after the storm to purchase emergency supplies and the organization continued to pay their wages for four weeks, providing a $1,000 advance early on, even though the three stores and distribution center were closed. It also flew 70 employees and their families who chose to evacuate Puerto Rico to the U.S. where they were reassigned to jobs at Best Buy stores in Florida.

Joly gave employees a voice to share their opinions and ideas and he was open about sharing information. For example, he shared the draft “Renew Blue” turnaround plan with 150 Best Buy managers to get feedback before presenting it to investors, an action that also showed he trusted they would not share non-public information on their publicly listed stock. No one leaked the plan.

When Hubert Joly became Best Buy’s CEO in 2012, the organization’s survival was in question due to the competitive threat from online retailers including Amazon.com. Over the following seven years, Best Buy’s share price soared from $11 to $110. For Joly’s successful turnaround of Best Buy, he was recognized as one of the “100 Best-Performing CEOs in the World” by Harvard Business Review, one of the top 30 CEOs in the world by Barron’s and one of the top ten CEOs in the U.S. in Glassdoor’s annual Employees’ Choice Awards.

Armed with knowledge that came from witnessing the power of connection while leading Best Buy and having written a bestselling book about it, Joly is now on a mission to fix capitalism while serving as a senior lecturer at Harvard Business School. He’s fast becoming an important voice for the case to make connection a new theory of leadership and organizational culture.

Reflecting on his own leadership journey, Joly wrote: “Like many leaders of my generation, I long believed that emotions were not meant to be shared in a business encounter. I had a lot to unlearn. … Our employees are expecting us to be human, and they expect us to grasp who they are and to make them feel respected, heard, understood, and included. … Social connection… is at the heart of business.”

To learn more about Hubert Joly, read his book, The Heart of Business: Leadership Principles for the Next Era of Capitalism, watch his interview with John Baldoni and read this article about him by Sally Helgeson.